The Numberphile video below is quite excellent, but some viewers might appreciate clarification on the topic. Watching the video is not required to follow this post.

We wish to prove the Pythagorean theorem using scale and similarity as our foundation, rather than the properties of squares and triangles together. In fact, we will hardly use square shapes at all, though square angles and squared numbers will be prominent. A strong benefit to this similarity approach is that it only requires one very simple drawing, which is a huge asset compared to most other proofs.[^n] Also, this method of proof tells us something deeper about the theorem, that there is a more general statement that can be made, which we call the "blob Pythagorean theorem" here.

We assume a (property of similar figures)(prop-of-sim-figs) that relates their linear and area measurements.

Property. Given two similar figures, if you draw a line in the first and scale it to get an (appropriately scaled)(app-scaled) line in the second, the linear ratio between the lengths of the lines is independent of what line you chose to draw. Further, if you obtain an area ratio (in the same way,)(prop-sim-same-way) the result will be the square of the linear ratio.

By "appropriately scaled", I mean what is shown in the diagram below. 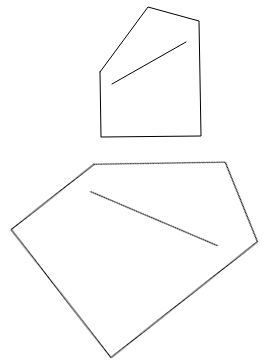 Take the first figure and the line you drew in it, and scale them together until the scaled figure is congruent to the second figure. Now the scaled line is "appropriately scaled".

By "in the same way", I mean that you measure the ratio between the area of any shape you draw and the area of its appropriately scaled version.

We will also need a (theorem to identify similar figures)(thm-ident-sim-fig), that is, to prove that two triangles we suspect are similar actually are.

If two pairs of angles measure \(x\) and \(y\), then the third angle on each triangle must measure \(180 − x − y\), so the third pair must be equal. The converse is trivial: three equal pairs implies two pairs are equal.

Note. These results are also discussed on Wikipedia and Khan Academy, as well as many others.

Original Theorem. Given a right triangle with [small sides][(the legs)] of lengths \(a\) and \(b\), and with a [long side][(the hypotenuse)] of length \(c\), it must be true that \(a^2 + b^2 = c^2\). This is the algebraic description; geometrically, if you draw three squares, each one sharing a side with one of the triangle's sides, then the sum of the two smaller areas equals the area of the largest.

Blob Theorem. Given a right triangle and a figure with nonzero area (called a blob), we may draw a line somewhere on the blob. If we scale the blob-and-line three times, each time scaling the line to be as long as one of the sides of the right triangle, then the sum of the two smaller blob areas equals the area of the largest blob.

That is, knowing the blob Pythagorean theorem holds for one blob implies it is true for any other blob.

Suppose that we have found a figure, called Blobby with nonzero area \(B\), and line, called Liney with length \(l\), for which the blob Pythagorean theorem holds on a particular right triangle with lengths \(a, b, c\), with \(c\) greatest. When we scale Blobby-and-Liney three times, the linear ratios for the scalings are \(\frac{a}{l}, \frac{b}{l}, \frac{c}{l}\). (Why?)(linear-ratios-why)

First note that reordering the multiplication in the first equation can simplify it to having a common factor in every term:

Then, given either that equation or \(a^2 + b^2 = c^2\) to start with, we may obtain the other, because we can multiply and divide by \(B/l^2\) freely and maintain equality. (This is what requires Blobby to have nonzero area. Otherwise, dividing by \(B\) would be a problem.)

Since every blob Pythagorean theorem on a particular triangle is equivalent to \(a^2 + b^2 = c^2\), they are all equivalent to each other.

The theorem to identify similar triangles shows that when the blob is the right triangle you are given, the blob Pythagorean theorem is true. (How?)(blob-right-tri-how)

Let's show that one particular blob Pythagorean theorem is true. We are given a right triangle in the theorem; let this be our blob. For the choice of line, choose the hypotenuse. The magic step comes in noticing that there is a clever way to cut our blob that defines all our scaled blobs at once: (taken from the video) 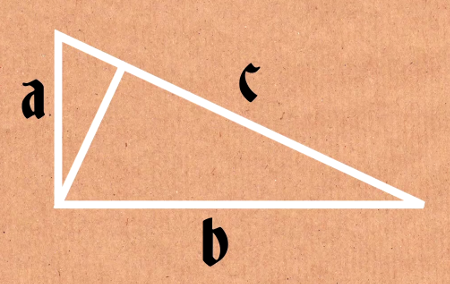 This line is very carefully drawn to be the one coming from the right angle and meeting the opposite side at right angles. Thus, we now have three triangles to consider, and each one shares its hypotenuse with a side of the original; if they are all similar triangles, then these are in fact the blobs we want, and it is clear that the two smaller areas add up to the larger, since we cut up the larger to get the two smaller ones.

Together, these facts imply the blob Pythagorean theorem is true for all blobs, including that of the square blob, which is the original Pythagorean Theorem.

As long as you know what Minecraft is, this article should make sense. If it doesn't make sense, please leave a comment! How? Why? Since Minecraft has the fun mechanic of making the player the level editor, and since I've been binging Extra Credits