The way they are discussed for SAT and GRE exams usually doesn't give students a good intuition.

Most probabilities are not independent, which means they have some sort of correlation. (Examples...)(correlated-examples)

So, independent probabilities are not like those, but are instead entirely unrelated, with no correlation whatsoever. (Examples...)(independent-examples)

You may think that the independence of \(U\) and \(V\) means we know very little about how they are related, but it's actually the opposite: We know they are completely unrelated. This unrelatedness means there must be a (fixed value for \(P(U\cap V),\)!Fixed Intersection.)(fixed-intersection) and further, it gives us (a symmetry!A symmetry.)(independent-symmetry).

If \(U\) and \(V\) are actually independent events, then knowing that one event has happened should not affect the probability of the other. In particular, if we look at only situations where \(U\) occurred, we should get the same probabilities for \(V\) occurring within those as within all possible situations. <!TODO: link to page about general definition of symmetry with "If it's unclear why I call this property a symmetry, click here.">

Now we can use that symmetry to find \(P(U\cap V)\). Here are two different but equally good ways to explain this step. (In terms of random sampling...)(random-sampling) (With a diagram...)(with-a-diagram)

Consider the symmetry of independence with a Venn diagram: (What is this?)(what-venn-diagram) (Why we can use it?)(why-venn-diagram)

This diagram is meant to show geometrically how every situation is in one of the following cases:

We know all possible situations are illustrated because for each of the events, they must either happen or not happen. (This is the same reasoning that tells us that \(P(U)\) and \(P(\operatorname{not}U)\) add up to \(1\).)

Now that we know what \(P(U\cap V)\) is, we can actually reduce all problems with independent probabilities to geometric ones using (a better diagram!Better diagram.)(better-diagram) than the generic Venn diagram in the last section. 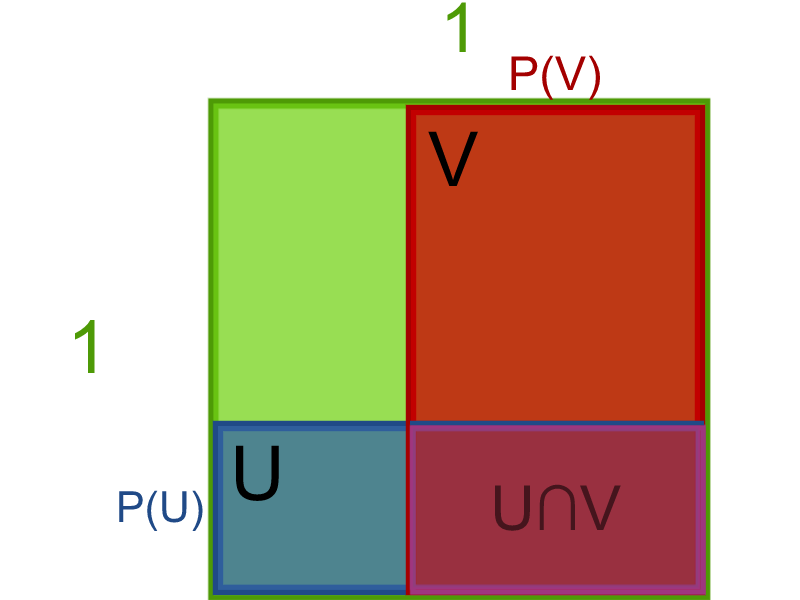 This works because it (meets all the conditions!Conditions.)(better-conditions). After drawing it, it (matches intuition!Intuition.)(better-intuition) about independent events. And it's a better diagram because you can (find all the probabilities geometrically!Geometric Probabilities.)(better-geometry).

The intuition comes from measuring out the probabilities in independent dimensions. Think of it this way: If you choose a random point in the square, its \(x\)-coordinate tells you whether \(U\) happened, and its \(y\)-coordinate tells you whether \(V\) happened. Since independent variables told you each thing, knowing one doesn't affect the other. You can even extend this reasoning to three events, measuring out their probabilities as lengths on the edges of a cube.

I condensed the rules to the card game Netrunner down from its 36 pages, mostly to lower the barrier to entry for new players. Ideally, this text and the starter Shaper and Jinteki decks, with the neutral cards shuffled in, should be all it

A series of charcoal artworks I made inspired by pointillist drawings with poetry. As always, I'm fine with anyone sharing my art with credit. Context I tend to have trouble drawing things, in the sense that I am horribly unmotivated to do so. In