Diabetes runs strong in my family. When I had a bad response to a weekend of cake, I felt the need to test my sugar response and make a plan.

A bad response to cake

It's Friday morning. I bake the "Family Favorite Chocolate Cake," because it's delicious and I haven't baked it in years.

I then eat half of it over the next three days. Because it's delicious.

That third day? Yeah, I didn't really eat anything else, not even my habitual bacon-and-eggs breakfast. "Cake makes a better breakfast," I thought. After my cake dinner and almost an hour of relaxing, I exercised a bit, and suddenly crashed hard: feeling exhausted, difficult to move limbs, difficult to think clearly. My girlfriend Jeannie was with me at the time, and to her, I simply appeared to "zone out" for a bit. She was unaware of how severe my exhaustion felt.

Jeannie and I were planning to head to Authentic Relating Games in separate cars. I told her to go on, that I was fine. Fifteen minutes later, right before I walked out the door, I felt unable to stay standing, so I went to bed and napped.

Some time later, my phone ringing in my pocket wakes me up. I fumble with my pants for a while, but can't get the phone out, so I give up and go back to sleep.

About an hour and a half after I started sleeping, she's back next to me, waking me up, trying to figure out why I never made it to games, why I'm just lying there, looking at her but not speaking. I was trying to speak, but the muscles just weren't doing it. I was trying to reach out to her, but couldn't lift my arm. After 15-20 minutes, I manage to start moving enough to grab my Chromebook and start typing messages into it, (accidentally texting a different friend instead of her,) and so I manage to tell her how I'm feeling. Eventually, she asks, "Do you need real food? All you've had today is cake."

That's when it all started to make sense.

So I asked Jeannie to call my mom, who walked us through dealing with a diabetic low, which was what I thought was happening. (My grandfather typically had highs that crashed into lows, so that was my reasoning. In retrospect, these symptoms could have been highs or lows, hyperglycemic or hypoglycemic.)

We started with a small lick of honey for quick carbs, then swapped to apple slices for carbs with fiber, peanut butter for protein, pecans for everything: protein with fiber and fat. I'd take a small bite of whichever sounded like it would taste the best, then drink water because I was really thirsty, then wait to see what my body needed next. I also made sure to start getting up and moving around a bit once it felt good to, to wake up my muscles and metabolism without exhausting myself.

In total before I started really feeling close to normal, I had probably (least to greatest) 1/4 tsp honey, 1 1/2 slices of apple, 1/3 cup peanut butter, 2/3 cup pecans, and 3-5 cups of water. Time-wise, that was over about another hour and a half.

The next day, I drive from Houston to Corpus Christi, to visit my parents as already planned. They have a spare glucometer waiting for me when I get there, and we decide to start monitoring my sugar, and to do a few tests of my tolerance to it.

Mostly technical from here on out. This is basically a lab write-up.

Note on the A1C

and why I didn't get one done

If you go to the doctor asking to be tested for diabetes, they'll typically have you take a blood test (that you can take without fasting) called the A1C test. It returns something corresponding to the average blood sugar you've had over the past 3 months. There were a few reasons we decided to not do that test for me, the most important of which were:

After I arrived in Corpus, I spent the rest of the day eating my dad's diabetic diet and monitoring my sugar. That normally means testing right when you wake up, right before eating, and 2 hrs after eating. (The wake up reading checks for how you were in the night, and you wait 2 hrs after eating because everyone has blood sugar go higher within 1 hr, but a diabetic's sugar level stays high or goes down very slowly.)

My readings seemed pretty normal, (morning and before eating in the 70-100 mg/dL range, after eating only 20 mg/dL higher,) and I was feeling much better, so the next morning we did a first (very informal) glucose tolerance test.

Very informal in that we just fed me as many pancakes with syrup as I could eat, without counting carbs, really. Trying to re-create the cake incident, you see.

I felt the same kind of really bad as I had after the cake within an hour, and my reading had gone from 87 to 154, which is high, but within normal. (I took it early since I was feeling so bad.) Taking a reading every hour, the next four readings were all within 5 mg/dL of 120 mg/dL, which is within typical error of the measurements (given by the device manual) of the same value, so I interpreted that as "not going down". (I also still felt really bad.)

Finally, I rode on a stationary bike for 10 mins, drinking a lot of water. I soon felt better and had a reading of 96 mg/dL, and it stabilized after that. (The next meal didn't cause a huge spike.) 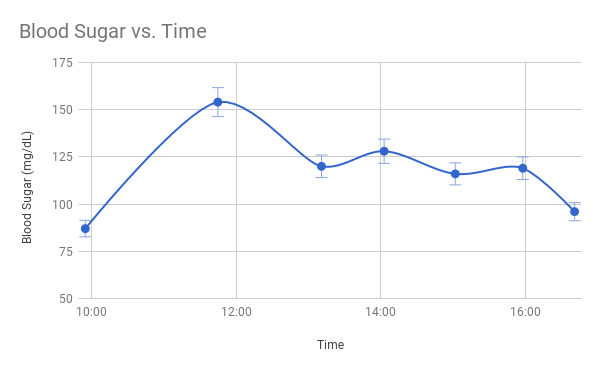 First, the readings aren't that unusually high, so I'm probably not diabetic.

However, I felt as bad as I had before exactly when my blood sugar was high, and it was unusual that my body wasn't able to metabolize the last bit of sugar without me deliberately exercising. Particularly concerning is that had I not taken a reading to know I was high, I would have just gone to sleep from feeling exhausted, same as before, and just stayed high instead of getting better.

Also, I felt the same as before when I'm pretty sure I had a low (given that every bit of food brought me closer to feeling normal). So it seems like either the cake case was a low that feels exactly like a high and I need a glucometer to tell highs and lows apart, or it was a high that I dealt with well enough by being a little active and eating so slowly that it wasn't a problem.

So it definitely seems like I'll need to have a glucometer on hand and keep my diet low-carb regardless. And I don't want to do any more tests of my glucose tolerance if I can avoid it. Feels baaaaad.

My dad (Darwin) looked up specifications for a standard glucose tolerance test and we decided to both do it to be able to compare our results formally.

The first main standard here that wasn't in the first test is regulating what you ingest. This time, I drank a Fanta, which has exactly the 75 g of sugar that would be used in a lab. (Dad drank a 7up that had 64 g of sugar, which is close enough.)

The second main standard is that there's documented "normal" values to go by when ingesting 75 g of sugar: Starting normal is 60-100 mg/dL, one hr after can be anything under 200 mg/dL, and two hrs after should be under 140 mg/dL, where 140-200 mg/dL is "prediabetic" (meaning not diabetic, but susceptible to becoming diabetic).

Dad napped throughout his test (setting phone alarms to take the readings), while I was awake but felt exhausted and terrible again. Our numerical results, plotted alongside normal and prediabetic ranges, were: 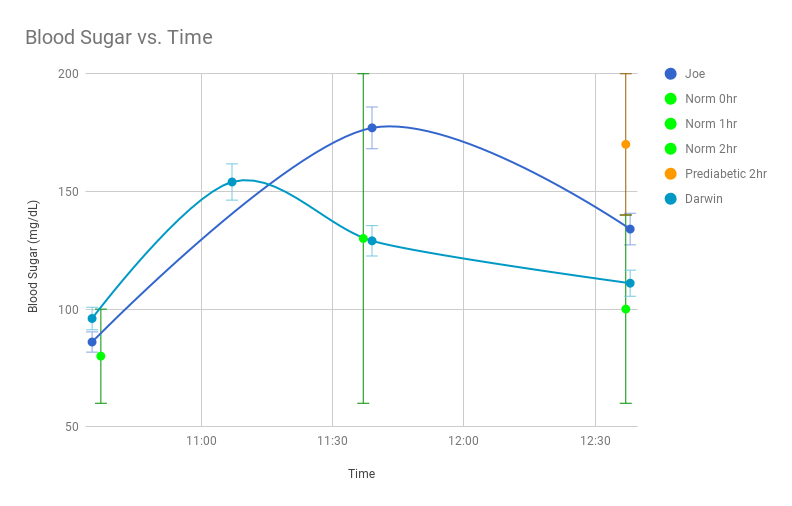 My numbers were within normal range, though my 2 hr reading was borderline prediabetic. Given that proximity and how bad I still feel during these tests, keeping my blood sugar under control with a low-carb diet still seems to be important for me.

For context, my dad (Darwin) has been diagnosed diabetic in the past, but is now controlling his symptoms with diet and exercise. So his numbers being normal is not surprising. In fact, I take this to mean that if I stick to his diet, I should be able to get closer to his curve the next time I take this test (which will be at least six months from now).

Having maintained a low-carb diet so far with Soylent, my usual bacon/sausage and eggs breakfast, nuts for snacking, and whatever vegetables-and-meat dish I feel like for dinner, I've been feeling way better in general than I have been the weeks prior. I don't even feel the need to check my sugar level most days! (And if I do have a heavy carb meal, like Christmas dinner, then soon after eating the bad feelings settle in again, and immediate exercise helps dramatically.) Looks so far like I have a good plan.

Art inspired by Yoko Ono's Acorn, a book of conceptual instructions, and my own meditations. Anyone may share with credit. Context The same book I bought four years ago, Acorn

I need to text every student from this semester with when I'm planning on going home, and I decided to search my tutoring calendar for the names using python to get a complete list. First Steps Things necessary to get started, that you may